Sandwiches, pizza, eggs and hamburgers. What do these delicious staples have in common? There are endless ways to enjoy them and when you add Muffuletta Hot Olive Salad to them you are enhancing their flavor by adding pickled veggies, spice, and texture.

That is why you should try Sonoma Farm Muffuletta Hot Olive Salad! —one of the most underrated food ingredients. Muffuletta Hot has a signature fiery kick, which lightens up the flavor of chicken, fish, meat, and vegetables. You can use it as a garnish to enhance the flavor of your dish.

Muffuletta Hot olive salad is traditionally paired with bread or added to dishes to add a much-needed flavor boost. The best part is that you can make your very own combination, so don’t be afraid to pair it with other food items to see what suits your taste. Sonoma Farm’s Muffuletta Hot will give you a taste of the authentic Muffuletta recipes that is crafted by generations of artisans. Each bottle will surely give you an authentic taste of Italy. 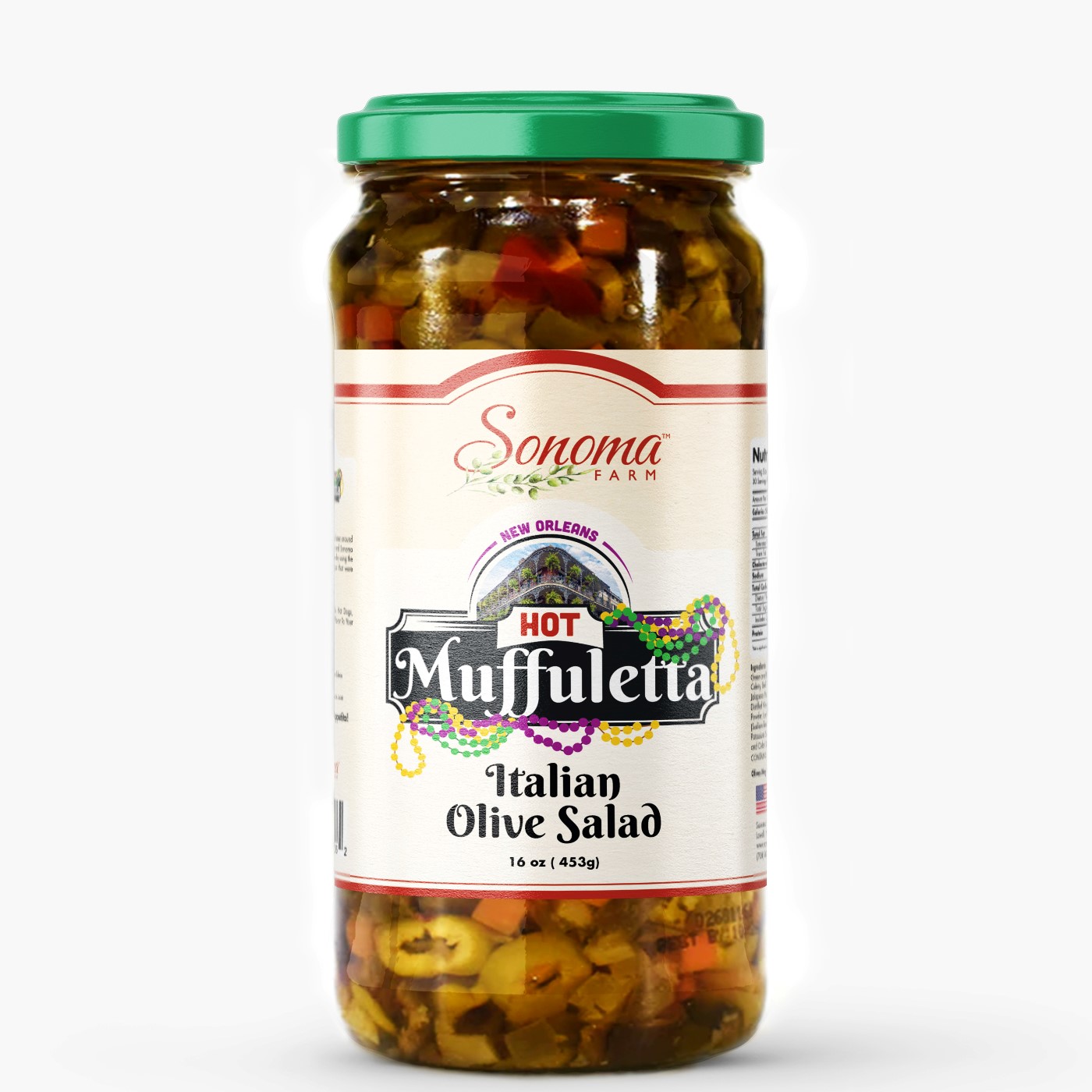 The beauty of this ingredient lies in its simplicity and versatility. It is made with fresh black and green olives that are cut by hand along with celery, cauliflower and carrots, then it is carefully seasoned with oregano and garlic to perfection, then lastly, it is covered in oil.

Even though it is mostly eaten with bread, it can still be used in a wide range of dishes. All you have to do is to mix and match to find out the best combinations. Its taste can be described as fresh, smooth, with a nice touch of spice. It is advisable to use it as garnish instead of cooking it in high heat since it contains olive oil and its taste alongside its health benefits are greatly affected when subjected to heat.

If you are still unsure on how to use this ingredient, you can start with making a simple sandwich. To get the authentic muffuletta sandwich experience, you can use a large, thick-crust, round loaf of Italian bread. It’ll taste better with sesame seeds too. If it is not available, a simple loaf of sliced bread is already enough to do the trick. 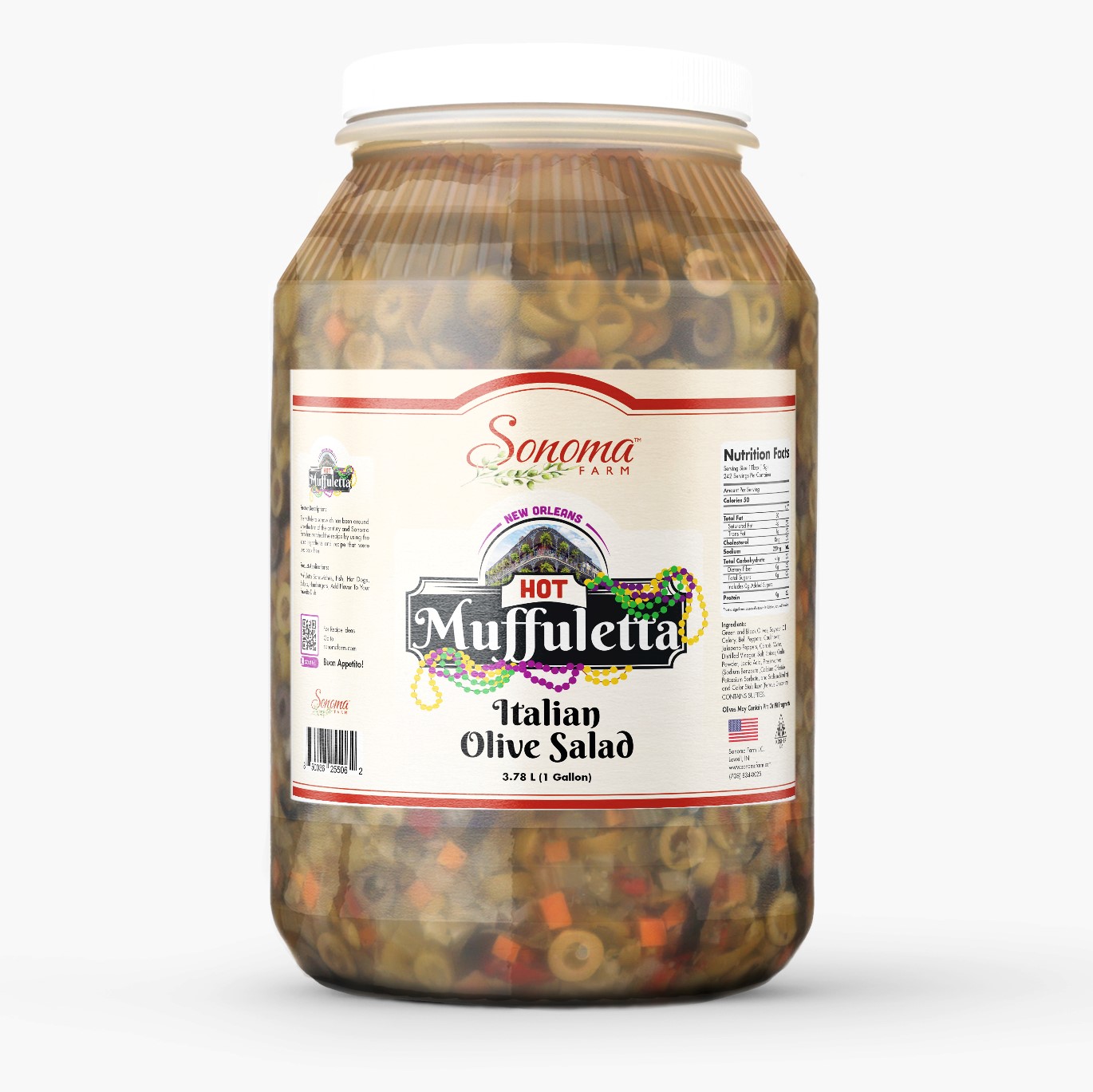 Arrange these sandwiches at least two hours before serving since the longer they soak, the better it’ll taste. Slice the bread in half horizontally, exposing the inside of both halves. Pour olive oil on the bottom half of the bread to soak generously. Add a thick layer of Muffuletta Hot over the bottom half of the bread. Layout the sliced salami evenly, distribute the meat over the bottom bread, and then add a layer of half the provolone. Next, a layer of mortadella which is an Italian cold cut that is made out of pork. Then, a layer of ham and another layer of provolone. Add the last layer of Muffuletta Hot on the top bread half and close it up.

Afterward, compress the sandwich for a few minutes to let the flavors mix. It will distribute the ingredients evenly. After that, heat the sandwich. Turn up the heat in your oven up to 350-degree, for at least 15 minutes. It’ll help in making the bread crispy, and the cheese melting inside quickly. It enables you to add a smoky flavor as well. Slice each muffuletta into quarters and enjoy it with a cold beverage.

Like other gourmet products, Muffuletta Hot should be consumed as part of a healthy, balanced diet. We provide your favorite Muffuletta hot gallon and jars that you can order online, you can visit https://www.sonomafarm.com  to get the option to order it in bulk to get the maximum discount. We offer a 5% to 15% discount on all bulk orders as well.